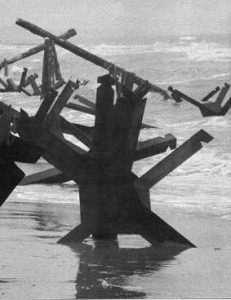 The landing craft ploughed through the waves to the beach
With their cargo of soldiers aboard.
Ahead lay the beach where their destiny lay
At a price they could little afford.

The soldiers stood waiting, their hearts in their mouths,
With their rifles held tight in their hands.
Around them the spray splashed up over their heads
As great shells from the shore rent the sands.

The word was that shelling from battleships near
Had the German defenders subdued,
But bouncing and soaking, and sounds that they heard
Did a whole different feeling imbue.

Each man, gripped with fear, felt a dread of this deed
That it now fell on them to perform.
Some vomited, filling the air with a stench,
While some prayed as they rode out the storm.

The coxswain called out that the shore was now near,
That their job was about to begin,
Then training took over, their courage returned
And their only thought now was to win.

The boat slowed then stopped as the cox brought his craft
To a stop on that perilous strand.
Then shoulder to shoulder as brothers they were
And they stood one last time as a band.

The door opened up and then suddenly Death
Came aboard as they tried to get off.
Men dropped where they stood and the corpses piled up
With the boat now a great bloody trough.

Machine guns spat death and men fell as they ran
Seeking shelter and solace ashore.
The sand stretched ahead, strewn with steel traps and wire,
While shells burst all around with a roar.

The water turned red as men fell one by one
And then passed with no sound ‘neath the waves.
The living would drown as the dead floated by.
Now they had nothing left but their graves.

On reaching the tank traps men struggled to find
A small place where a soldier might hide.
They used fallen comrades as shields for themselves,
On these crosses of steel, crucified.

The tide coming in forced them on up the beach
Till at last they attained the sea wall.
They cowered in fear as they dug in the sand
While the bullets continued to maul.

Then officers called for the men to find guns
Or to take up what weapon they can.
To get off this beach and to push back the foe,
Then to capture this place was the plan.

The wire was then blown and the soldiers poured forth
Charging on up the beach blindly on
No thought now for death, or the shells or the mines,
And their fear of the bullets all gone.

They fought them in bunkers, in pillboxes too,
Struggling desperately for each trench.
In hand-to-hand-combat they killed or were killed,
And with gore that fell hillside was drenched.

With courage they fought to the top of the bluffs,
And the Germans they drove from their lair,
Through firestorm and shrapnel with bullets all round
And black smoke hanging thick in the air.

When after they’d stopped and the killing was done
They’d a chance to take stock of the day,
To think of the dead and the wounded they’d lost
And a chance then to kneel down and pray.

They prayed for their slain, and their comrades in pain,
And gave thanks for the fact they’d survived.
Then after they’d had a hot meal and a drink,
Peaceful sleep their low spirits revived.

The sun warms the sand stretching all down that shore
‘Twixt the hills and the shimmering sea.
The villages peaceful, the countryside green
With a bird singing high in a tree.

A flag flies aloft keeping watch o’er the boys,
Who on Omaha Beach their lives gave.
Set high on the bluffs, overlooking the strand,
In that cemet’ry, none but the brave.